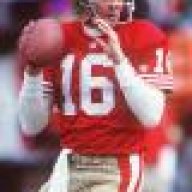 Location
Far side of the moon

deep9er said:
I know JG isn't a tier 1 NFL QB, but wasn't willing to give up so much draft capital.
Click to expand...

I mean did the Chargers think Drew Brees was one of the greatest QB's of all time when they drafted Rivers?

As good as Rivers was it ended up being a pretty big mistake to let Brees go. I'm not expecting quite that level of turn around from Jimmy G but hopefully competition brings back the Jimmy we saw for 5 games in 2017 because I don't think he's played with that level of confidence and fire since the knee injury he suffered the following year.
D

Wouldn't made me feel better if Lynch countered Miami with a 5th or 4th first, anyway......
P

Wouldn't made me feel better if Lynch countered Miami with a 5th or 4th first, anyway......
Click to expand...

It's very nearly a 4th round pick as it is the comp pick for minority hires to coach or GM positions.
You must log in or register to reply here.

Our 2021 draft picks summed up