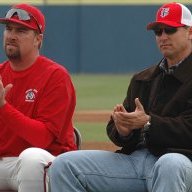 Since we don't have any Giant baseball for a few days, I thought I'd do my annual scouring of the other 29 clubs and see which former Giants and/or Giant farmhands played in the big leagues this season. My criteria is that they have had to been either on the 40 man roster or played on a minor league affiliate to make this list. With the FZ era, this has expanded the amount of names since he likes to pick up and then quickly jettison guys without them playing a single game. Without further ado, here is the roster of the best, with the remaining listed at the bottom of each section:

Bullpen (criteria is who pitched the most innings and posted good to decent numbers. Many who did not make it had good seasons but not enough innings to qualify)
Long Relief - Chris Stratton had a decent year with the Pirates, throwing 79.1 innings in 68 games and posting a 1.298 WHIP and 3.63 ERA. Yusimeiro Petit doesn't throw quite as many innings but still got in 78 innings in 78 games, posting generally solid WHIP (1.038) and ERA (3.92) but with a troublesome 37 Ks. Jonathan Loaisiga had a phenomenal year with the Yankees (1.019 WHIP, 2.17 ERA), even filling briefly their closer role (9 saves) while Chapman struggled.
Early relief - These two guys both had to get a bit of a career resurrection. Pierce Johnson had to go overseas to figure things out but the Padres have benefited as he game them a very solid season (77 Ks in 58.2 innings, 1.261 WHIP and 3.22 ERA). Phil Bickford, meanwhile got dumped by the Brewers before figuring things out with the hated Dodgers. He helped with a 1.072 WHIP, 2.81 ERA while striking out 60 batters in 51.1 innings.
7th inning guy - He bounced from the Rays to the Angels to the Brewers, but Hunter Strickland quietly put up a good year. His K rate wasn't great (58 in 58.2 innings) but he had good numbers both in WHIP (1.158) and ERA (2.61).
8th/9th inning guys - Will Smith and Mark Melancon both pitched as closers for their teams, with Melancon (surprise!) possibly being the better of the two. He outdid Smith in ERA (2.23 vs 3.44) but Smith did better in WHIP (1.222 vs 1.132) and Ks (59 in 64.2 innings vs 87 in 68 innings).
Others who pitched - Sergio Romo, Heath Hembree, Derek Holland, Burch Smith, Sam Coonrod, Wandy Peralta, Dan Winkler, Steven Okert, Ashton Goudeau, Anthony Banda, Tony Watson (before his reacquisition). Matt Wisler, Drew Pomeranz, Kyle Crick, Shaun Anderson, Jandel Gustave, Fernando Abad, Sam Selman, Connor Overton, Derek Law, Josh Osich, Kyle Barraclough, Luis Madero, Nick Vincent, Travis Bergen, Sam Moll, Jake Jewell (before his reacquisition), Daniel Camarena, Dusten Knight, Julian Fernandez, James Sherfy, Joe Biagini, Nick Tropeano, Mike Kickham and Keury Mella. Also, Ray Black was on the 60 day IL with the Brewers.

Outfielders
Left field - Hey, this name is intriguing mainly because he was picked up for the guy right below. Andrew McCutchen may have slipped quickly from his prime days in Pittsburgh but he's been able to keep playing full time. He was an exclusively a left fielder for the Phillies, hitting .222/.334/.444 in 146 games.
Center field - Probably the cream of the crop would be found here in Bryan Reynolds. The 26 year old slashed .302/.390/.522 in a incredible rebound from a dreadful 2020 campaign.
Right field - Here is another outfielder that the Giants may have sold low on, but he's also bounced around quite a bit. Adam Duvall spent most of the 1st half with the Marlins before getting traded back to the Braves. It seems that both no team and many teams want him. He hit a combined .228/.277/.491 in a bit of a down year for him. While he played mostly in right field, he did see time in both center and left fields as well.
Backups - Kevin Pillar played a lot for a Mets' team that saw signficant injuries, hitting .231/.277/.415 while playing all three outfield positions in a total of 124 games. Connor Joe was a pleasant surprise for the Rockies, hitting .285/.379/.469, while playing left field and 1st base, before a late season injury cut short a good rookie campaign for him.
Other who played - Billy Hamilton (71 games, cf-lf-rf); Gerardo Parra (53 games, lf-cf-rf); Skye Bolt (32 games, cf-lf-rf); Matt Joyce (43 games, lf-rf); Johneshwy Fargas (22 games, cf-lf-rf); Henry Ramos (18 games, rf-lf); Jose Siri (21 games, rf-cf-lf); Cameron Maybin (9 games, cf-lf-rf); John Andreoli (7 games, lf-cf-rf)
You must log in or register to reply here.