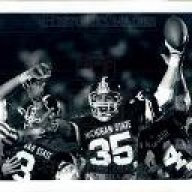 That's a Michigan Man for yeah

This guy in a giant Ass Hole. Based on this game alone. But when you factor in the Gholston incident and some of his other problems he needs some mental health help.

Wonder if the Detroit media will crucify him like they did Gholston? That film segement put together by ABC during the game should get Lewan suspended for their next game IMO. I guess UofM is Thug U now.

This guy is Michigan's version of Richie Incognito (aka the Crazy Cornhusker). Remember when Richie spit in the faces of MSU players and put the cheap shot on Stanton (blew out his knee) in the Alamo Bowl game. 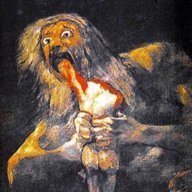 Somewhere along the line, Lewan began confusing a winning attitude with a pathological neurosis for vengeance & retribution...his teammates, (and far more disgustingly) his coaches and trainers supported the kid's psychosis. He's now, thankfully, the poster-child for bloodied & beaten bullies everywhere; a dirt bag who's seen his draft status plummet, his predisposition for thug punk play exposed and his reputation as a 'victor' shown to be that of a petulant pos loser in the eyes of millions. Shameful shit...even more shameful, though, imo, is the fact that the U will continue to coddle and place assholes like Lewan on pedestals...sportsmanship can go fuck itself in AA.
S

Nah, they just went and gave him a OL of the year trophy instead. Shoulda been a UFC belt!
You must log in or register to reply here.