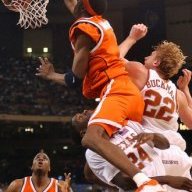 Syracuse basketball team received another commitment for the 2015 season when Moustapha Diagne committed at the Mary Kline Classic in West Orange, New Jersey

Diagne, a native of Senegal, had drawn scholarship offers from Kansas, Florida, Connecticut, Cincinnati, Villanova, West Virginia and many other schools, but he had recently trimmed his final list to Syracuse and Memphis.

And a way too early determination that SU is leading the pack. There remains a boat load of talent out there and SU has used all their scholarships.

But anyways...if you're Orange, this will make you feel purdy good.

Syracuse, N.Y. — ESPN Recruiting Nation just released its updated rankings for the high school basketball players in the Class of 2015, and Syracuse is dominating the charts.

Syracuse has already received four commitments from recruits in the 2015 class, and all four are in ESPN's newest rankings. In fact, all four future Orange players are in the top 70.

No other school has as many commitments for 2015. Ohio State has three commitments. Arizona, Illinois, Georgetown and Florida each have two commitments.

Syracuse's four commitments are Malachi Richardson, a 6-5 shooting guard from Trenton, N.J.; Frank Howard, a 6-5 combo guard from Paul VI High School in Fairfax, Va.; Tyler Lydon, a 6-9 forward from Pine Plains, N.Y.; and Moustapha Diagne, a 6-9 forward from Pope John XXIII High School in Sparta, N.J.
Diagne is the most recent commitment. He announced his decision at the Mary Kline Classic in West Orange, N.J., on Saturday.

Of the four Syracuse recruits, Richardson is rated the highest. He is ranked 15th in ESPN's index. Diagne came in at No. 44. That's a curious drop, especially for a player who, by all accounts, has tremendous upside. In ESPN's previous rankings, Diagne was at No. 29.

A Page From Bama Football

SU is gambling someone will leave early to the NBA or transfer. I'm mixed how I feel about this approach.

The commitments, combined with the players currently on Syracuse's roster, would put the Orange at the NCAA's limit of 13 scholarship players heading into the 2015-16 academic year.

However, the Syracuse coaches will continue to pursue two highly-rated players in the 2015 class — Thomas Bryant, a 6-10 power forward/center from Rochester, N.Y., and Derrick Jones, a 6-6 wing from Philadelphia. Bryant is the No. 11-rated player in the 2015 class, according to Scout.com, and Jones is ranked 13th. 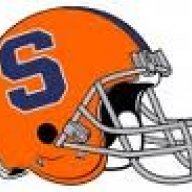 
Not much big man. I'm still cleaning up after winter, but am getting there.

I'm waiting on bass season to open up. I'm off the week following opening weekend. I have a buddy coming up from SC for the week. He loves the St. Lawrence opening week. We do catch a shit load of smallies up here.

On opening Saturday I plan on being on Cayuga or Seneca Lakes. Prolly will fish em both. Suday and Monday we'll be on Sodas Bay and Lake Ontario. Tuesday traveling back up here and fishing the St. Lawrence the rest of the week.

How did ya make out?

Used to live in Sodus Point. Sailed outta the SBYC, met my wife there.
You must log in or register to reply here.

In the Mouth of Sadness: Tennessee Volunteers Football

Way Too Early 2018 Recruiting Big Board