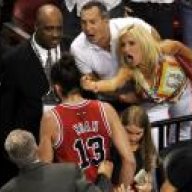 Let's use this thread for all things Heat off-season lottery, draft, etc. It is going to be another ride.

Free-agency moves so far for the Heat:
Re-Signed Goran Dragic to a 2-year $37.4M deal
Myers Leonard also agreed to a 2-year deal I believe it is around 20M
Kelly Olynyk has opted into his contract but can still be traded(hopefully not)
Udonis Haslem coming back another year -- I think he may have gotten a 2-year deal as well -- not sure.

Heat have lost Derrick Jones Jr -- not a huge loss because he was downgraded to a limited role, but I thought he could still contribute in his own ways when given the chance. Jae Crowder off to the Suns - he wanted to go elsewhere -- and it might not have been the best fit for him with the Heat anymore considering the latest additions by the Heat.

Gabe Vincent brought back on a two-way deal

These last two additions are going to help and be great fits for our defense. Let's see if there is room or if the Heat creates room to add a little bit more to the offense.

But I like how these additions fit for the Heat.

Buyouts and releases will start to come now - so let's see if the Heat adds to the team from that list.

Heat and Bam agree to a 5-year $195M extension that could reach up to 200M
You must log in or register to reply here.