One more win in the WC game!!! Lets Go Tribe!

I knew it was going to be a good season for Cleveland when they hired Terry Francona as manager.

I hated seeing him leave my Red Sox.

With his former pitching coach, John Farrell, now managing them, it could well be a Boston-Cleveland ALCS.
Farrell does seem to have benefited from working under Francona as long as he did. 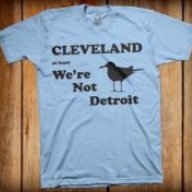 This has been one helluva wild ride. Watching the locker room celebration. Cant find words but got a feeling this Cinderella team is far from finished

We have seen what hot WC teans have done the last couple years.

But Francona ended the Red Sox long WS drought, I hope he can do the same.

They are hot at the best time!!!
B

ONE HELL OF A FINISH

Finished with Two more sweeps for the season. 1/2 way through the season thing looked bleak but damn the last Mos. was awesome for Tribe. Here is to finishing the dream